Wellington Airport has announced its unaudited results for the six months ended 30 September 2021 with an EBITDAF before subvention payment1 of $31.5 million and a net profit after tax of $3.0 million. 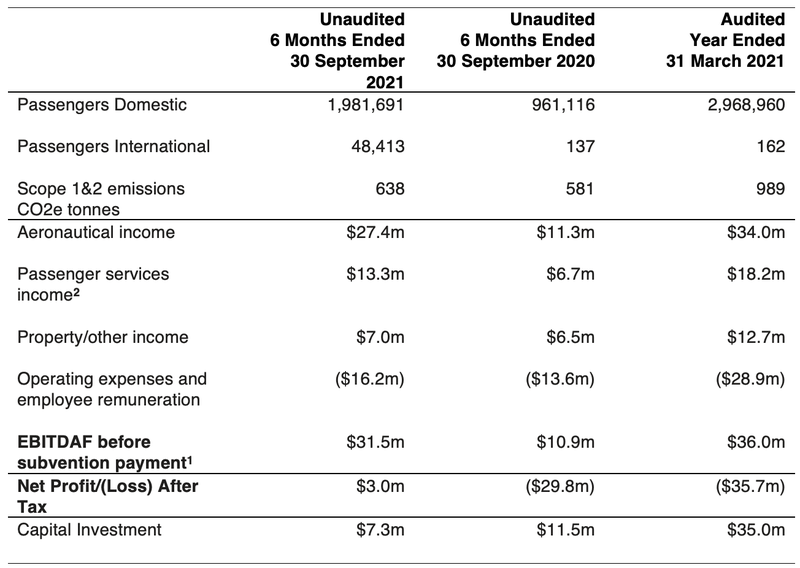 During the period domestic capacity at the airport reached 94% of pre-Covid levels in July 2021 before the latest round of Delta lockdowns. This is a heartening indicator of how quickly air travel recovers, even following severe and prolonged disruption. For that month Wellington Airport’s EBITDAF was $6.4 million, an indicator of the speed at which earnings will bounce back once travel normalises.

Following this peak, traffic slowed to 45% of pre-Covid levels during August and September when domestic restrictions were re-introduced and the trans-Tasman bubble paused.

Steve Sanderson, Chief Executive at Wellington Airport said: “After a strong start to the year, the latest Covid lockdowns are again putting pressure on Wellington Airport, the aviation industry, businesses, general travel, and the entire tourism industry. However, ongoing demand to travel domestically and our continued efforts to reduce capital and operating expenditure, puts us in a good position to manage the uncertainty Covid presents. This was recently acknowledged by S&P Global Rating’s decision in June to upgrade the airport’s credit rating from a BBB negative to a BBB stable outlook. In September investors showed strong support for our $125 million issue of ten year bonds at a yield of 3.3% pa”.

Capital expenditure was reprioritised and reduced by 37 per cent compared to the same period last year. Despite this, the Airport continues its programme of resilience works, especially relating to earthquake strengthening and seawall strengthening.

­­­­­­­­­­­­­­­­­­­­­“Commercial revenue continues to be impacted by the travel restrictions, but we are confident domestic passenger numbers will recover quickly once the whole country can travel freely again”.

Before the latest Covid-19 lockdowns in August 2021, the period started strongly, with domestic travel reaching 94 per cent of pre-Covid passenger numbers in July and more than 18,000 passengers travelling through the airport on its busiest days.

Sanderson said: “The strong domestic demand was partly due to Kiwis’ desire to see friends and relatives and more of New Zealand while the borders are closed, stronger than anticipated recovery in business travel and popular Wellington-based events like Wellington On a Plate and Beervana attracting people to the city”.

Throughout the period, Air New Zealand reinstated a significant amount of regional capacity in response to demand, and Jetstar has been continuing to rebuild Wellington capacity.

Before the Delta outbreak in August, regional demand saw some routes selling more seats than pre-Covid. This includes Hamilton, up 24 per cent, Queenstown, up 15 per cent and Dunedin and Tauranga, both up 10 per cent.

Smaller operators such as Sounds Air, Air Chathams, OriginAir and Golden Bay had also been carrying more passengers in response to domestic demand.

“Despite the excitement around the trans-Tasman bubble opening on 19 April, frequent pauses and the eventual suspension of the bubble resulted in only 48,000 international passengers for the first half of the financial year, just over 10 per cent of pre-Covid levels.

“We are continuing to work closely with Government agencies and airline partners to support the safe and sustainable return of international services. Against this backdrop, we have expressed our alarm to Government about a number of agencies proposing to radically increase levies on travellers. This is the wrong time to be increasing charges on travellers. Wellington Airport has kept its own price increases to a minimum and expects to see Government agencies doing the same rather than doubling their charges.”

Unsurprisingly, the latest Delta lockdowns have had a negative impact on domestic passenger numbers, dropping to two per cent of pre-Covid levels for the last two weeks of August while the whole country was in Level 4 lockdowns. However, since Wellington and most of New Zealand returned to Alert Level 2 on 8 September, domestic passenger numbers have reached 50 per cent of pre-Covid levels, even with Aucklanders being unable to travel.

In May, an independent hearing was held at the airport in respect of the Notice of Requirement designations for the airport’s main site and the southern portion of the existing Miramar Golf Course. Independent Commissioners have since made a recommendation to confirm both designations subject to some conditions.

“This does not mean we are immediately going ahead with spades in the ground, but it does provide the community with certainty about how the airport is likely to be developed over time and it enables us to expand efficiently within set conditions of use. We are aware there are some submitters who are planning to appeal this decision through the Environment Court, but we are strongly of the view the expansion is in the best interests of Wellingtonians and will continue working through this process to support the future needs of the city and to enable our climate response”.

As with the previous year, the airport is continuing to focus on capital projects needed for regulatory or resilience and safety reasons. This includes preparing for major upcoming projects, including improvements to our stormwater network and sea walls, a reconstruction of Taxiway Bravo, and a new Airport Fire Station.

As at 30 September, Wellington Airport has provided noise mitigation packages to 79 homes as part of its Quieter Homes programme. The latest stage of the programme is currently being rolled out to residents, despite the challenges presented by Covid-19.

“While there are many benefits to having a truly city airport, including accessibility, proximity to events and meeting venues, and lower land transport and emissions, we know this means our neighbours are closer. We are very mindful of our impact on the local community and proud of the benefits the Quieter Homes Programme provides for some of our closest neighbours”.

In September, Wellington Airport received the results of the annual GRESB Infrastructure Assessment, scoring 95 out of 100. GRESB provides an opportunity to validate, and benchmark the Airport’s Environmental, Social and Governance (ESG) performance data against other airports and infrastructure assets.

“This year’s results put us at number two for airports in Australasia and clearly demonstrates our commitment to playing our part in New Zealand’s net zero plans.

“Climate considerations are at the forefront of all our strategic decisions, and we are committed to helping New Zealand achieve net zero emissions by 2050. The pathway to get there will be set by the Government’s Emissions Reduction Plan, following the advice of the Climate Change Commission and we look forward to the details being released in May next year”.

Wellington Airport is working closely with Sounds Air to ensure it is able to facilitate the airline’s first electric fleet from 2026. As part of this planning, the airport is developing an electrification plan, assessing energy needs and planning for future infrastructure requirements.

“The Climate Commission and Emissions Reduction Plan consultation documents are both clear that aviation will have an ongoing role in a net-zero future. Electric aircraft on short-haul regional routes are key to sustainable air travel in future and we are taking steps to achieving this within the next five years.”

The airport has continued to significantly reduce electricity and gas consumption in the terminal during the period, while also focusing on supporting retailers and getting the good vibe back passengers were used to before Covid-19.

“Since the beginning of the financial year we’ve welcomed TJ Katsu Dumplings and Noodle restaurant and Te Papa’s first satellite store to the terminal, further improving the diverse retail offering. Passengers have also been enjoying live music and free tastings in the terminal in collaboration with citywide events, such as Beervana and Wellington On a Plate.

“We know the past 18 months have been extremely challenging for all our airport stakeholders and we are continuing to do all we can to ensure they remain buoyant and in a good position for recovery and growth”.

The Rydges Wellington Airport in particular had an exceptional start to the year, with conferencing facilities outperforming pre-Covid levels over the first six months of the year. Occupancy levels have dropped in line with the decrease in passenger numbers due to the latest lockdowns, but the Airport is confident numbers will recover quickly again once restrictions have been removed.

1 EBITDAF before subvention payment is a useful non-NZ GAAP measure of earnings which presents management’s view of the underlying business operating performance. A reconciliation between WIAL’s Net Profit or Loss After Tax and EBITDAF before subvention payment is set out in the NZX announcement and Note A1 of the Financial Statements for the six months ended 30 September 2021.